Vitebsk state medical university started its operation in 1934 as a medical hospital institute with 250 students. 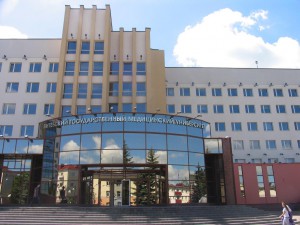 rn university Switzerland from the faculty of medicine.Those 12 professors were very well known as medical scientists all over the world.

Professor Gurevich Pavel Markovich was the first dean of vitebsk state medical university and he was a graduate from French university.

in 1948 scientific society of the students was formed at the institute.

The new building of the Vitebsk state medical university was constructed in 1959 and the same  year faculty of pharmacy started to work.General medicine faculty was already working for Years.

In the year of 1962 there were new constructions for central research laboratory and hostel No 3 & 4. In 1974 preparatory faculty was established at Vitebsk state medical university first time.In 1986 two hostels were constructed No1 & 2.In 1987 two new establishments were made and these were sports complex and dining building.

In 1981 the training for the foreign students at general medicine faculty and pharmacy faculty was started.In 1984 faculty for the advance medical training was established.

For foreign students training the faculty was established in 1997.Dentistry faculty started working in 2001.

Vitebsk state medical university clinics started working under the Ministry of health,Belarus in 2003.

Vitebsk medical institute was given the status of university in 1998.

Those international students who want to study in Belarus at Vitebsk State Medical University may contact us freely anytime for their 2021-2022 admission process through the following contact details.

Hellow
Im 27 years old and i want to take advantage to study in your university,bachelor of medicine and bachelor of surgery
I choose vitebsk due to the low cost which you have and i only can afford that amount
I have finished my diploma in clinical medicine 2017 and now i want to upgrade that diploma to MBBS
I hope you can help me to fulfill my dreams
Thank you

how much for german language B2level course and duration please

Hi.
im a srilankan student who has completed my advance level last year with results1c2s and my stream was science including the subjects chemistry physics and biology i would like to further study medicine in vsmu. Am i eligible enough to join in this university?

My daughter would like to study General Medicine – do you have an agent in Zambia?

HELLO PLEASE I WANT TO KNOW IF IT WILL BE POSSIBLE FOR ME TO TRANSFER MY COURSE TO VITEBSK STATE UNIVERSITY, BELARUS. I AM AN UNDERGRADUATE STUDENT 300 LEVEL PHARMACY IN A REPUTABLE UNIVERSITY IN NIGERIAN.

Now we are available for live chat online always.In case none of our staff member is online than you may leave message in live chat window and we will contact you at earliest.Please do not forget to write your mobile number in the messege.

You may contact us directly for your admission in Belarus or for any inquiry. Email:studyabroadbelarus@gmail.com Ph,WhatsApp & Viber:+380506742243(Multilines)

Please contact us if you are interested in studying in Russia in English medium courses. We have a wider range of available courses in Medical,Engineering and Commerce fields.

© 2016 All Rights Reserved Study In Belarus